Skip to Content Skip to Navigation
< Back to index

ARLINGTON, VA - In an effort organized by the National Milk Producers Federation and the U.S. Dairy Export Council, 70 dairy companies, farmer-owned cooperatives, and associations today sent a letter to the United States Trade Representative and the U.S. Secretary of Agriculture asking the U.S. government to capitalize on the conclusion of Japan's national elections and quickly finalize a strong trade deal with Japan in order to secure critical market access for the dairy industry here at home.

"Given that Japan is an established market with a growing demand for dairy products, the successful negotiation of a robust trade agreement with Japan will bring a much-needed boost to the economic health of the U.S. dairy industry and set our industry up on a path to compete effectively there moving forward. Securing robust dairy export opportunities into this overseas market will be critical to restoring confidence for our dairy farmers and processors across the country," they wrote.

The continued success of the U.S. dairy industry relies on stable export opportunities to markets abroad and Japan represents a major opportunity to expand growth. However, the Japan-EU agreement and the Comprehensive and Progressive Agreement for Trans- Pacific Partnership (CPTPP) have allowed the European Union, New Zealand and Australia to position themselves to seize sales from the U.S. dairy industry. Swift negotiation of a trade deal with Japan that builds upon the best components of the Japan-EU agreement and the CPTPP is urgently necessary for America's dairy farmers and processors.
"Eroding dairy competitiveness in Japan is at a critical point. The time to re-level the tariff and access playing field is right now," said Stan Ryan, President and CEO of Darigold. "Today Darigold supplies over 50% of the US American-style cheese exports to Japan. Those sales will soon be lost as competitor trade deals take effect."

"Japan has been a very important market for Leprino Foods Company's US-produced products for years," said Sue Taylor, Vice President of Dairy Policy and Procurement for Leprino Foods Company. "We invested heavily in developing lactose and whey protein exports several decades ago and, more recently, mozzarella exports into this important market and believe that the market has significant further growth potential.  We risk losing these sales and growth opportunities to competitors who recently finalized preferential trade agreements unless the US negotiates a strong agreement.  We are very supportive of the administration's efforts to secure an agreement that allows us to retain and grow this important market."

"Japan is an important market for Glanbia Nutritionals, where we have the opportunity to grow our dairy exports," said Wilf Costello, Chief Commercial Officer for Global Cheese with Glanbia Nutritionals. "We are at an important juncture where our competitors have secure preferential trading terms that are impacting US dairy ambitions. To ensure we can deliver on the opportunity in Japan, we need our trade negotiators to quickly finalize a trade agreement that secures access for American dairy products and ample room to grow."

The U.S. exported $270 million in dairy products to Japan in 2018 with room for further growth. However, without a strong U.S.-Japan trade agreement, half of U.S. dairy sales to Japan will be wrested by competitors, mounting to a toll of $5.4 billion in lost export sales when Japan's deals with the EU and CPTPP are fully phased in. 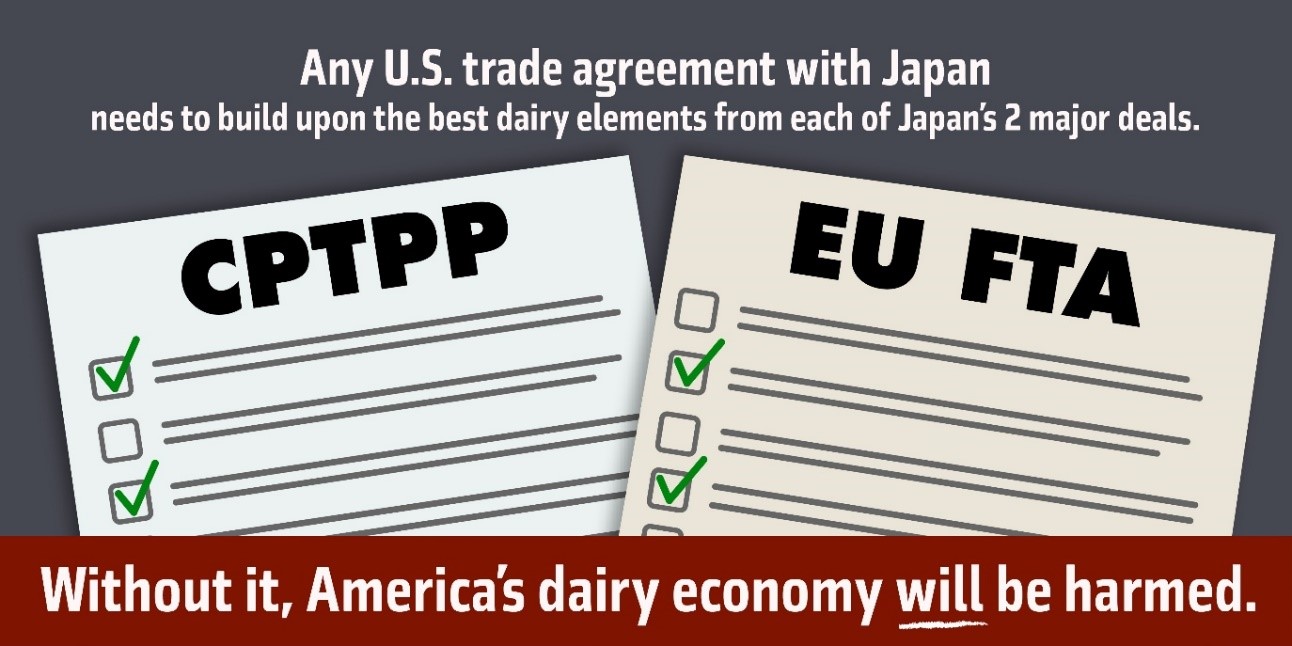